July 12-13 Thur- Friday  It’s 540 miles from Kanaskat-Palmer State Park near Seattle to Emery Bay Campground on the East side of Glacier National Park.  For us that made two stops.  Unlike the majority of our trip I did not make reservations for this part. Once we had a general idea where we might be wanting to stop, I started looking up campgrounds on my phone apps.  I use Allstays most of the time, but RVpark and Campendium are handy too.  Boon-docking at Walmart or elsewhere was not an option due to: 1) There were no Walmart’s.  2) It was 90 degrees out and we need a 30 amp electric hookup to run our AC.  Calling ahead I encountered “nope- we are full” and no answer on the camp office phones.  A state park said they “might” have a walk-in open but no guarantees.  We ended up at two very nice private parks but they were expensive. $45 and $63 per night. OUCH!  I sure wouldn’t want to travel like that all the time.  The $63 site had a nice golf course view and lovely pool and the other had loads of playground equipment and bike, kayak and tube rentals.

Beautiful drive though across Washington, Northern Idaho and into Montana through mountain passes and along winding rivers.  Lots of high points overlooking rolling hills, mountains and streams.

So we arrived at Emery Bay National Forest Service Campground near the East entrance of Glacier National Park.  But first we had to travel on six miles of gravel road, the first three miles were treated and not too bad but the last three – HOLY COW- DUSTY!!!!!  Clouds of dust so thick that sometimes you couldn’t see in front of you.  Then it settled in, on and around our RV and truck. Once at the campground the dust continued with every vehicle that drove past our site.  There is a boat launch at the camp – so besides the campers we had boat trailer traffic.  Our camp site was a no service site – no electric, no water.  We had to rely on our water tank and RV battery for power.  Of course- no AC, no TV and all of the glamping luxuries I am accustomed to.  Oh and the camp host stopped to greet us and to warn us of bear activity around the campground!  Each camp site had a bear box for the tent campers to store any foods, toothpaste and clothes worn while eating. So glad we have a hard sided camper! 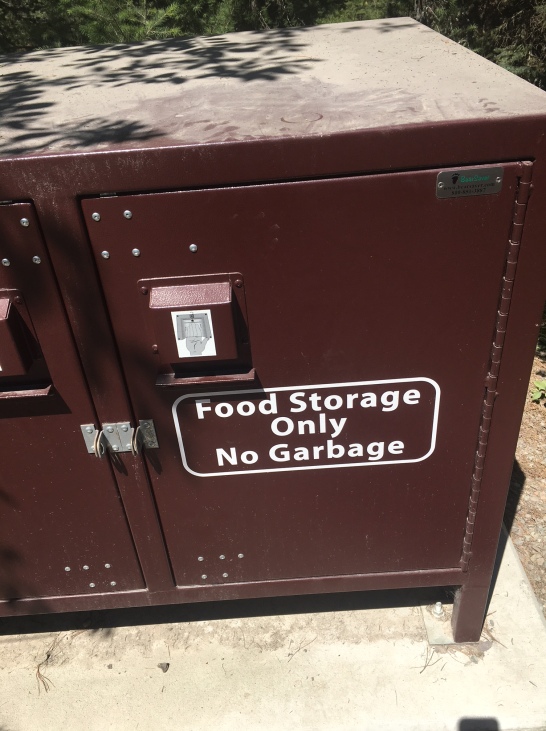 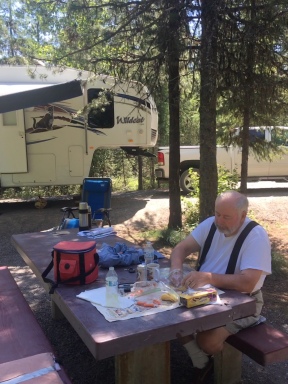 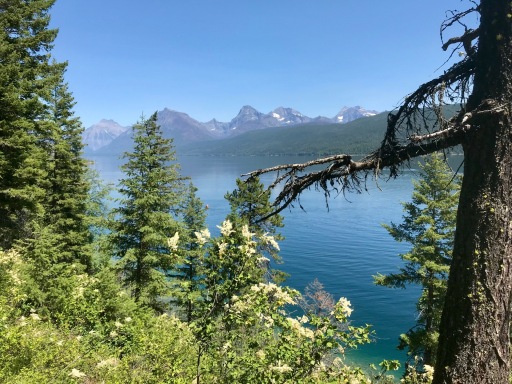 The campground is one of several on the Hungry Horse Reservoir.  We drove over to see the dam,  at 564 feet, one of the ten highest in the United States.   It had a (cool to us) over flow drain – like a giant bathtub drain to drain off surplus water.  It was still flowing, per the locals snow melt was late this year and waters are still running from the mountains. 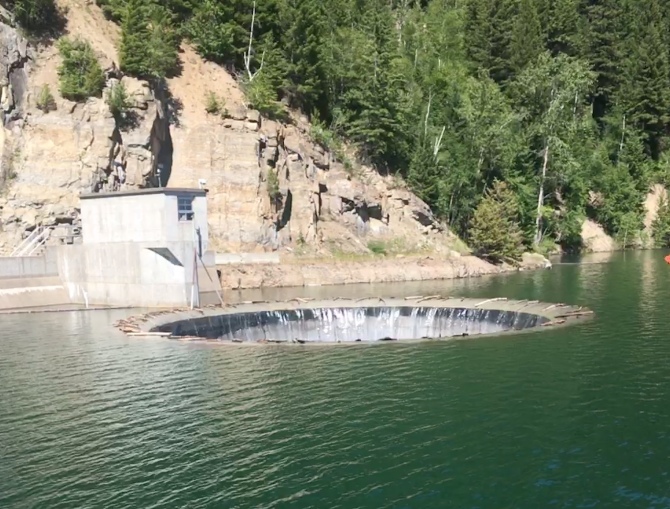 Despite all my complaints – it was a lovely campground, very much a wilderness retreat surrounded by mountains and if it wasn’t for the dust it would have been one of my favorites.  It was very hot during the day, but we left early for Glacier and returned in the evening when the temps dropped.   Lows during the night were into the 50’s so sleeping was not an issue.  We did go for a nice cold swim on our last evening there and we never did see a bear.