The Freight House Market in Davenport is huge and chock full of food vendors.  I began with an ear of roasted corn and then we picked up a breakfast pizza cooked in a brick oven.  Super yummy and apparently prosperous as they had four people manning the stand and the pizzas sold as fast as they could make them. $9.00 each and one was sold about every 6-8 minutes. We added an egg roll and crab rangoon from the vendor across the aisle and found a shaded bench to enjoy our feast and the view of the crowded busy market.  The market stretches out along the river next door to a minor league ball stadium, home of the Bandits.  The ball park had a large Ferris wheel that I imagine would be beautiful at night all lit up with the river and bridge beyond it.  We would have stayed longer browsing the many stalls selling veggies, food and crafts but the day was heating up fast. Nine thirty in the morning and already 90 degrees! 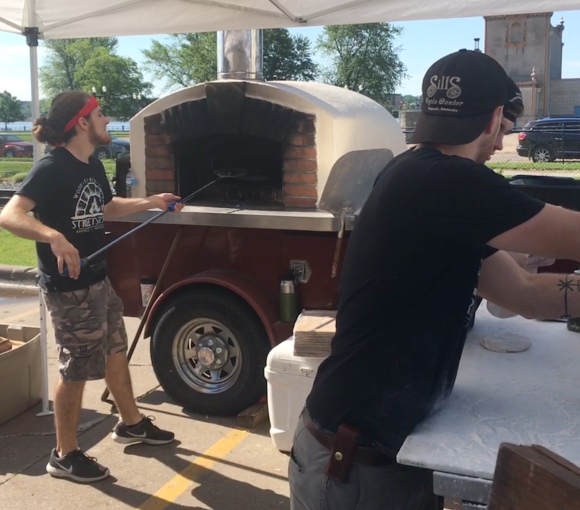 We drove north along the riverfront, beautiful river view mansions on the left , industry and water on the right.  Reaching Le Clair we stopped at Antique Archeology, of American Pickers TV show fame.  The two buildings were full of their pickings and a fair amount of souvenir t-shirts, hats, mugs etc. 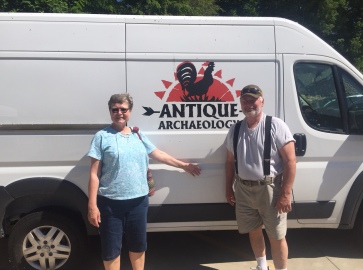 The town of Le Claire is very pretty with a big variety of shops and restaurants.  Alas, too hot for strolling on main street for us.  We opted to visit the Buffalo Bill Museum.            Le Claire was the birthplace of Buffalo Bill.  The museum told the history of his life as well as local history.  There was a lot of memorabilia, old tools, relics and river history packed into this small museum.  There was also a full size paddle wheeler that you can go aboard and imagine Mississippi River life in days gone by.  All this great stuff and the only picture I took was this gorgeous clematis blooming outside. 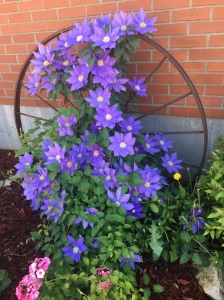 Sunday May 27:   We drove 181 miles straight west on I80 to just north west of Des Moines, Iowa.  We are staying two nights at the ACOE Bob Shetler Campground at the foot of the Saylorville Lake Dam. Our site backs up to the spillway outlet that feeds Des Moines River.  Water rushes in a roaring torrent from a giant culvert like opening in the dam.  Watching the powerful, foaming, splashing gush of water meet the river is quite memorizing, like an explosion that never ends.  The river bank is populated by fishermen that regularly pull in good sized fish.

Monday, Memorial Day May 28:  This morning we drove across the top of the dam and up along the lake.

Our camp site is to the right of the parking lot 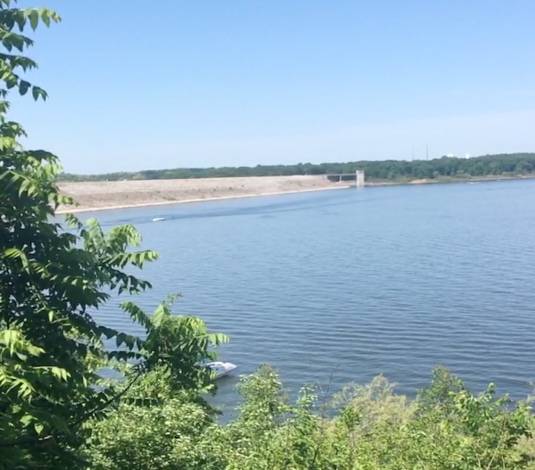 Lake side of the dam

We stopped at a day use swimming area.  There was a ACOE volunteer cleaning up the beach.  She had collected bags and bags of trash left behind by yesterdays beach users.  How people can be such pigs and spoil otherwise beautiful public areas is just so uncivilized and rude, I just can’t understand it.

After a tasty waffle breakfast we stopped at the Dam Visitor Center, where John left behind a rock

and then we proceeded on to the Iowa Gold Star Military Museum.  It is located at Camp Dodge, headquarters of the National Guard .  It has displays of uniforms, weaponry, aircraft and vehicles going back to the the 1800’s.   Being Memorial Day it was full of vets (some in full uniform) telling their stories and sharing history with their families and museum attendees.  A senior veteran shared with us the value of letters sent from home. His story had both John and I wiping away tears.  I would like to share with you a Memorial Day tribute written by my friend Jane Markle Stagner:  They stormed the beaches, marched through dry endless sand covered deserts, trudged through the dense under growth of steamy jungles. They shivered in the cold…..endured the raging waves while aboard ships. They flew in darkness…in storms…in the hail of bullets. They endured hunger, sleep deprivation, and separation from family, friends, and home. They witnessed the evil and unspeakable atrocities inflicted upon mankind in times of sheer madness. They fought in the face of insurmountable odds against them…..they fought when it would seem there was no hope….they fought….and kept on fighting. They died fighting…….some on the field of battle…..some later because of wounds inflicted….some as a result of chemical warfare…some because of the psychological toll the battle inflicted upon them.
There are families and friends who remember them with tears…and as time heals smiles of the good moments shared. But all should be remembered with respect, gratitude, and and honor. God bless all who served and gave the ultimate sacrifice for us….for our freedom.

We are back at camp again, hiding inside AGAIN.  I get persuaded to go outside by the roaring river, the pretty blue sky and the trees dancing with little breezes tempt me only to fizzle or should I say “melt” quick.  Temperature  is 99 and I just. can’t. do. it. !!!  Still good times.  John is painting rocks and I am reading a book on my Kindle plus this blog of course.  Life is good here at the dam.